(i) Where was the flat of the two artists located?

Answer: On the third storey of an old house

(ii) From which disease was Johnsy suffering?

(iii) Which two things Johnsy used to do while she was sick?

Answer: Lie in her bed and gaze out of the window

(iv) Which phrase as used in the extract mean ‘called?

(v) At what frequency doctor used to come?

(i) What did Sue talk about with Johnsy?

(ii) Did Johnsy move out of her bed during her sickness?

(iii) Who brought the drawing board into the room?

(iv) Which phrase in the extract mean ‘to divert attention’?

Answer: to take mind off

(v) What did Sue do to try to divert attention of Johnsy?

(i) Who was doing the reverse counting?

(ii) What was the wall made of?

(iii) How high the creeper had climbed?

Answer: half way up the brick wall

(iv) What was shedding leaves?

(v) Which word as used in extract is synonymous of ‘muttered’? 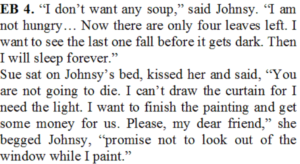 (i) Why did Johnsy not want to take soup?

Answer: She was not hungry.

(ii) How many leaves are now left on the creeper?

(iii) What does Johnsy want to see?

Answer: She wants to see the last leaf fall

(iv) What according to Johnsy will happen when last leaf falls?

Answer: she will die

(v) Why Sue was making a painting?

Answer: She wanted to sell it to earn some money.

Answer: Not to look out of the window while she was painting

(vii) Which phrase as used in the extract mean ‘to die’?

Answer: sleep for ever

(i) Who is referrered as ‘he’ in above extract?

(iii) Which phrase in the extract mean ‘narrated’?

(iv) What was Johnsy convinced about?

Answer: She would die when the last leaf fell

(v) What had remained a dream for Behrman?

Answer: Because Johnsy was sleeping

(iii) How many leaves were there on the creeper?

(iv) Why did ‘they’ feel that leaf would fall any moment?

Answer: It was raining heavily and icy-cold wind was blowing.

(v) Which word in the extract mean ‘walked without making any sound’?

(vi) Which word in the extract mean ‘looked?

(i) Who observed that leaf was green?

(ii) Which word has been used to define speed of wind?

(iii) When did Johnsy hear the winds?

(iv) What did Johnsy thought about the last leaf?

Answer: it would have fallen

(v) According to Johnsy when would the last leaf fall?

(vi) According to Johnsy what would happen when the last leaf falls?

Answer: she will die.

(vii) Which word in the extract mean ‘even now’?

(i) Who is speaker of above extract?

(ii) To whom above extract has been addressed to?

(iii) Which phrase in the extract mean ‘to take care of’?

(v) What did the speaker finally understand?

Answer: it is sin to want to die

(i) To whom does ‘I’ refer to in the above extract?

(iii) How long Behrman has been ill?

(iv) Who was the first to find that Behrman had fallen sick?

(v) Why were shoes and clothes of Behrman wet?

Answer: he had remained out of his house in a stormy night

(i) Now the leaves were falling –

(ii) How many leaves were on the creeper three days ago?

(a) more than hundred

(b) less than hundred

(iii) Who was counting leaves?

(iv) Which word in the extract is synonym of ‘rubbish’?

2. A psychologist should have been called to treat Johnsy

3. Sue thought leaves had nothing to do with life of Johnsy

4. Another creeper could have been planted

“Try to sleep,” said Sue. “I have to paint an old miner. I will call Behrman up to be my model.”

(i) Johnsy was waiting for the

(a) Doctor to give her medicine

(b) last leaf to fall

(c) Sue to give her soup

(ii) What or who has been considered poor in above extract?

(v) According to extract what is not true about Johnsy

1. She was tired of waiting

2. She wanted to die

3. She wanted to go away peacefully

4. She wanted to call Behrman

5. None of the above

Answer:  Her friend Johnsy was suffering from pneumonia. Although a doctor was visiting them every day but health of Johnsy did not improve. She use to lie still on her bed and keep looking outside the window.

Answer:  Doctor thought there was something worrying Johnsy. In his opinion she had made up her mind not to get well. He thought that if she did not want to live, medicine cannot cure her.

Answer:  Johnsy had assumed that her health would get worse with every falling leaf. She had assumed to the extent that when the last falls she would die.

Answer: Yes, Sue tried her best. She talked to Johnsy about clothes and fashions. She brought her drawing board in the room to give her company. She whistled while making painting to cheer up Johnsy.

She had assumed that she will die once the last leaf also fell. So the reverse counting was an indication of time  available to Johnsy.

Answer:  Sue had shifted her drawing board to Johnsy’s room to cheer her up. She needed light to make painting. So she did not put curtains on the window.

Johnsy was getting depressed due to reducing number of leaves on the creeper.

Thus Sue requested Johnsy to not to look outside the window.

Answer:  Johnsy incorrectly thought that she would die once the last leaf fell off the creeper. But the last leaf was taking some more time to fall.

Therefore Johnsy made that statement.

Answer:   The night was windy. So sue had thought that last leaf would have fallen. But when she removed the curtain she could see a green and healthy leaf on the creeper.

Thus she exclaimed. Actually it was a painting made by Behrman.

Answer:  The last leaf appeared to be cringing to the creeper.  It did not fall during the whole day. In the evening there was storm. Still the leaf did not fall.

Now a change took place in the thoughts of Johnsy. She understood that it was sin to want to die.

Answer:  Doctor talked to Sue about condition of Behrman. He informed her that Behrman was also suffering from pneumonia. His condition was critical. Behrman had very little chances of surviving.

Answer:  Behrman made a painting which Johnsy could see through the window. He had made this painting in the night though it was raining and and wind was icy cold. In this painting the leaf was intact with the creeper. He did so because he wanted to save life of Johnsy.

Answer: To save life of Jhonsy he had made a painting in the night though it was raining and wind was  icy cold. In this painting the leaf was intact with the creeper. But he got wet and caught pneumonia. He died within two days.

Answer:  The leaf seen on the next day was not the real leaf. It was a painting made by Behrman. It looked so real, green and healthy.

It did not flutter because it was a painting.

Answer: Sue had sent for the doctor. She ensured that he visited every day. She used to understand Johnsy’s condition from him.

Sue took due care about Johnsy’s diet. She would prepare soup and other eatables. She affectionately served these to her friend.

Sue talked about clothes and fashions to Johnsy. She wanted to keep Johnsy’s mind off her disease.

She would motivate Johnsy. She tried her best to convince that falling of leaf had no relation with life of Johnsy. Sue brought her drawing board into Johnsy’s room. She whistled while making drawing.

Sue also consulted an experienced painter Behrman who lived in the same building.

Answer: Behrman was definitely a good painter because he tried to excel. He wanted to be better than what he was yesterday.

We need to accept that being human is much better that a human being. Behrman possessed this rare attribute. Behrman realised the incorrect co-relation Johnsy had drawn between her life and the last leaf. It shows that he was a wise person to quickly understand a situation.

During the stormy night he made a painting of a creeper and a leaf. It was made across the Johonsy’s window. The painting looked so real. Within a day, Johnsy developed the will to live longer. He saved a life.

But Behrman caught pneumonia and died within two day.

Thus being human is much better attribute of Behrman.

Answer:  Johnsy had fallen sick. A doctor used to visit her every day Her friend Sue used to take good care of her.

Johnsy had drawn wrong co-relation between her life and falling of leaves of an ivy creeper. Her friend Sue tried to convince her otherwise but it was of no avail.

The doctor wondered what was worrying Johnsy. He had told Sue that if the patient is not willing to live, no medicine can cure sickness.

Later thoughts of Johnsy changed, she wanted to live. She started improving. Doctor too expressed that she would get well soon.

Thus earlier Johnsy was sick because of her thoughts. Once her own thoughts changed, she started improving.

Thus the statement is justified.

Answer:  Sue was a good friend. She took good care of Johnsy when she had fallen sick. She cooked and served food to Johnsy.

Sue believed in taking advice of experienced people. When Johnsy was not improving, she had gone to Behrman to seek his guidance.

Sue was a great motivator. She had shifted her drawing board to room of Johnsy. She whistled while making paining. Sue talked about clothes and fashions to keep Johnsy’s mind off her sickness.

Sue had set her priorities right. She knew that they needed to earn money. Thus she continued to make paintings while simultaneously taking care of other aspects.

Thus Sue was a good friend, a great motivator who knew her priorities.